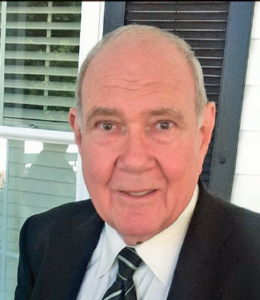 Joseph Nicholas Rizzo of Fort Mill, South Carolina passed away on Monday, Nov. 7, 2022, at the age of 90. After several months of declining health, Joe died peacefully with his loving family by his side.

Joe was born in New York on January 6, 1932, to parents Nicholas Rizzo and Josephine Sabella Rizzo. His sense of duty, work ethic and love of country helped him while serving in the Army where he was stationed at Fort Benning, Georgia.

At the end of his military service Joe returned to New York and took on various jobs until settling into his lifelong career as a stockbroker in Great Neck, New York.
Throughout his life and by his warmth, charm and bright personality he made many long-lasting friendships, most of which remained his entire life.

Joe had a passion for his community and was a long-standing member of the Kiwanis Club and served as president in 1994-1995.
Those who knew him would say he was kindhearted, funny,
generous, and caring. Joe was also an avid tennis player, fisherman and adored cars, fine food, dancing, history, and cinema. First and foremost was a devoted father and grandfather.

People wishing to honor Joe’s lifelong commitment to family and
community can make donations to the Levine & Dickson Hospice House at Southminster: https://www.hpccr.org/