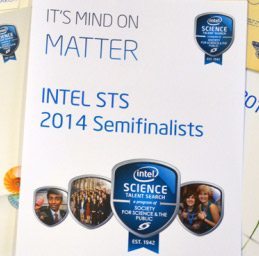 Five students from the Great Neck Public Schools have just been named semifinalists in the 2014 Intel Science Talent Search. Intel is often considered the nation’s most prestigious pre-college science competition.

North High School’s semifinalists, with their project titles, are: Richard Feder-Staehle, “Analysis of Chandra X-ray Data of Elliptical Galaxies in the Cosmic Evolution Survey (COSMOS);” Luhong (Larry) Li, “Velocity Gradients in Relation to Spatial Scale of Star-Forming Dense Cores in the Perseus Molecular Cloud;” and Terry Wei, “Comparing the Back-projection Method of Analysis with the JMA HiNet Catalogue Using the 2011 March 11 Event to Determine the Effectiveness of Imaging Aftershocks.”

South High’s semifinalists, with the titles of their projects are: Evangeline Giannopoulos, “The Identification of Novel Runt and Even-Skipped Transcriptional Co-factors in Drosophila;” and Kara Kupferberg, “A Study of Non-verbal Emotion Perception and Autism: Influence of Gender and Emotion.”

A comprehensive article on the semifinalists and their award-winning projects will appear in a future edition of this newspaper.

Given The Green Light