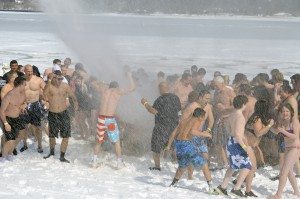 Town Supervisor Judi Bosworth began the program by thanking the Special Olympics and the Polar Plunge committee for embracing the challenge presented by this frigid winter, which left Hempstead Harbor frozen and unsafe to plunge into.

“Our committee would not be denied this year, and cancelling this event was not an option,” said Bosworth. “I applaud everyone involved including the Port Washington and Bayville Fire Departments for making today a reality so we could continue to raise funds to support Special Olympics New York and all of their wonderful athletes.”

The $67,000 raised will help support more than 200 Special Olympics athletes for a full year. This event is part of more than a dozen Polar Plunges annually in New York, which last year raised nearly $1 million for Special Olympics New York.