The 2019–20 Great Neck Public Schools (GNPS) budget was officially adopted by the GNPS Board of Education during a hearing at North Middle School on Tuesday, April 16. Though showing a 1.99 percent budget-to-budget increase, the budget includes a projected tax levy increase of 1.94 percent, about two percentage points lower than this year’s tax cap limit of 4.09 percent.

Eighty percent of the budget will be allocated “for our programs for our instructional area of the budget,” according to John T. Powell, assistant superintendent of business and finance.

“This is the way you want a school district’s budget to look,” Powell said, proud of the distribution of the proposed budget expenditures.

The tax levy increase of 1.94 percent, despite the allowable increase of 4.09 percent, reflects how the administration and the board have a “fiscal responsibility to taxpayers,” according to Barbara Berkowitz, Board of Education president.

“We had authority to go as high as 4.09 percent,” Powell said. “This Board of Education has always been sensitive to the tax burdens of its residents. That is the main reason why this tax levy-to-levy increase is 1.94 percent instead of the 4.09 percent.” 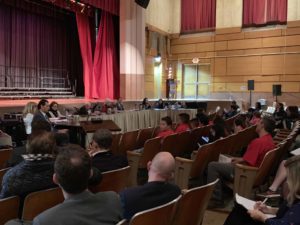 The proposed budget outlines many new plans for the upcoming school year, including adding elementary, secondary, ENL and special education teaching positions due to increased enrollment, expanding the Universal Pre-Kindergarten program to include classes at the John F. Kennedy School, increasing security and nursing staff, and establishing a robotics and drama program at the elementary level.

“We are one of the few school districts in New York State where our enrollment is increasing,” Powell said. “People want to come to Great Neck for the great public schools and the great instructional programming being offered here.”

The additions to this year’s budget reflect that with increasing enrollment, more needs have to be met. 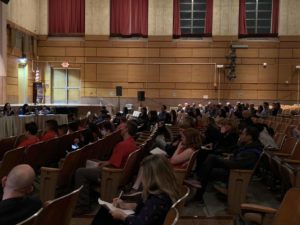 “With this proposed budget, our students will continue to receive the innovative instruction that has established the Great Neck Public Schools as a premier school district on Long Island, in the state and in the country,” Superintendent of Schools Dr. Teresa Prendergast said. “I am grateful for the support of the board in presenting this fiscally responsible budget, which preserves our high-quality academic and extracurricular programs.”

The budget, now officially adopted, will be voted on by the public on May 21 from 7 a.m. to 10 p.m. at four different voting locations, depending on each resident’s voting zone. Find your assigned voting location at www.greatneck.k12.ny.us/budget.