Enjoy music under the stars in Jonathan L. Ielpi Firefighters’ Park (Jon’s Park) on Grace Avenue on Tuesday nights throughout July and August starting at 8 p.m. The Village of Great Neck Plaza in cooperation with the Great Neck Park District and the Great Neck Social Center will present entertainers performing a cross section of musical genres. 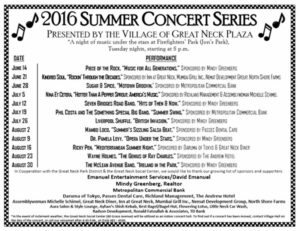 This week, the British are coming to Great Neck Plaza as Liverpool Shuffle performs on July 26.

Taking on the personas of John, Paul, George and Ringo, Liverpool Shuffle provides an exciting and authentic re-creation of a live Beatles show, with an emphasis on faithfully performing the songs as the group did more than four decades ago. Originally formed in 2003, the band brings together veterans of the New York music scene who have a collective 150 years of experience between them.

“Whether you are young or old, the music of the Beatles resonates with those listening to their tracks, even influencing the music of today’s artists,” said Mayor Jean Celender. “This Tuesday, Liverpool Shuffle will help us relive that special decade that the Beatles transformed music, playing the hits that made the foursome one of music’s most storied acts.”

Bring a picnic and a blanket and spend the evening relaxing at Fire-fighters’ Park, which is conveniently located a few blocks from the Great Neck Long Island Rail Road station, just off the plaza’s shopping district. Jon’s Park has restrooms, picnic areas, a children’s playground, an enclosed area for small children, an aqua park and a gazebo, which doubles as the stage.

“We are thrilled to be able to support the Summer Concert Series, which has been a summer tradition in Great Neck Plaza for over 20 years,” said Laura Capra, senior vice president and head of Retail Banking of Metropolitan Commercial Bank.

Catch these musical groups on the following summer evenings:

Aug. 30: The McLean Avenue Band, “Ireland in the Park”

In the event of inclement weather, concerts will be held at the Great Neck Social Center at 80 Grace Ave. Call Village Hall at 516-482-4500 or visit www.greatneckplaza.net to confirm the concert location.