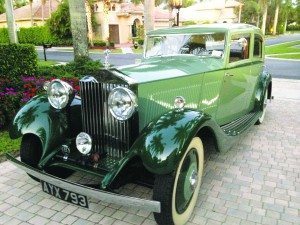 It is also the only one of its kind registered with the Rolls Royce Historical Society. These rare vehicles took a year-and-a-half to produce, and sold for $20,020 at the time. Today, this vehicle is considered priceless. The Rolls Royce company was started just 20 years earlier in 1904 by Charles Rolls and Henry Royce. Rudes’ car is a piece of history, and one of the earliest models of the luxury line.

In addition to the 1934 Rolls Royce Park Ward Saloon, this year’s AutoFest will see the return of the custom Stutz “Speedster,” owned by Steven Gittleman. This one-of-a-kind automobile was built for Cornelius and Grace Vanderbilt in 1926, features the Vanderbilt colors, maroon and black, and was part of the introduction of the original “Vertical Eight” engine. The “Speedster” was considered to be technologically ahead of its time when it was built, as its custom engine produced a higher horsepower than its competitors at the time, including Cadillac, Duesenberg, Kissel, Lincoln, Packard and Wills St Clair. The vintage vehicle also features a fitted “Conestoga” top, which provided the Vanderbilts with comfort.

In addition to these two showcase cars, over 100 vintage vehicles are expected to be on display at the Great Neck Plaza AutoFest and Street Festival including Model A Fords, Camaros, Matadors, Corvettes and other classic American and European cars.

The Great Neck Plaza Business Improvement District’s (BID) mission is to foster and promote a positive and vital business community through various initiatives including consumer awareness programs, media/advertising campaigns and sponsorship of many events including the annual AutoFest and Street Festival. The day-long event draws a crowd of tens of thousands and features live entertainment, rock climbing walls, a petting zoo, carnival games and inflatable bouncers while showcasing the sights, sounds and flavors of Great Neck Plaza.

Visit www.shopgreatneck.com or call 516-829-1301 to learn more about the Great Neck Plaza BID and this year’s AutoFest and Street Festival.